Woods at the double, as Kilby secure Cup Final spot

East Kilbride set-up a South Challenge Cup final meeting with Bonnyrigg Rose, after seeing off Hill of Beath Hawthorn on Saturday in Fife.

Sean Winter gave EK the lead from the penalty spot in the 12th minute, after Woods was fouled, and Woods then hit a quick-fire double to send EK into a 3-0 lead inside the opening 25-minutes.

But what looked like a formality turned into a nervous ending, as two late Beath goals set up a tense finale.

However, Stuart Malcolm's men held on to claim victory and will now face East of Scotland side Bonnyrigg Rose in the final at Meggetland on Sunday 26th May. Kick-off is 2pm, and further details will be posted on the fixture list nearer the time.

EK will be aiming to claim the SFA South Challenge Cup for a third time, after triumphs in 2014 and 2017. 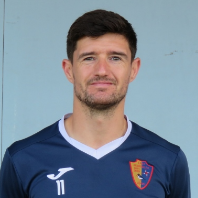