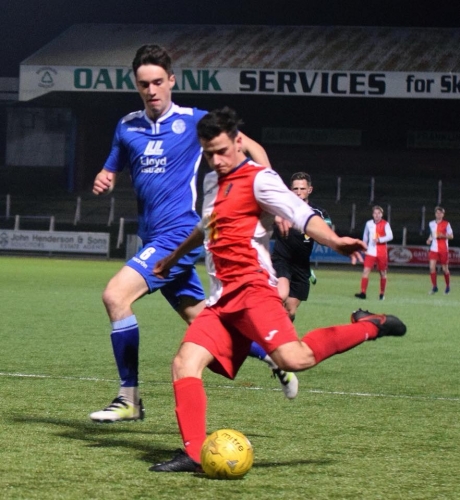 Substitute Jay McInally was a thorn in the side of Rovers, and netted EK's first goal.

A dominant second half saw EK Reserves move back to second place in the SPFL Reserve League after seeing off full-time opponents Raith Rovers 4-0 at K-Park on Tuesday night.

Sam Henderson in the EK goal saved brilliantly at 0-0 before half-time, with EK going closest through Longworth in a first half that also saw an EK goal from McKinlay chalked off for offside.

The second half saw the introduction of Reserve top scorer Jay McInally, and the bustling striker made the breakthrough on 58 minutes, chasing a fine ball from Fraser Robertson before doing the rest himself and smashing a low left-foot shot home from a tight angle.

The goal was well deserved and seemed to inspire more confidence in the young EK side, and the lead was doubled just five minutes later when Craig's wide cross was brilliantly cushioned by Scott Brodie, and Jamie Longworth lashed the ball low into the net from 12-yards to make it 2-0.

The game was over as a contest just four minutes later, when Lewis Warnock drove forward to find Liam Craig, and the powerful winger unleashed a wonder strike from 25-yards to put the game beyond Rovers. Craig then had the luxury of an uncharacteristic penalty miss 15 minutes from time after McInally had been wiped out in the box.

Kilby sub Andy Brown saved the best for last, the talented winger pulling the ball out the sky before cutting inside past two defenders and drilling a low shot into the corner to net his first competitive Kilby goal.

The Reserves are next in action on Tuesday 4th December, when they have the chance to hit the league summit, if they can defeat current leaders Livingston at Almondvale. Kick-off is 8pm.