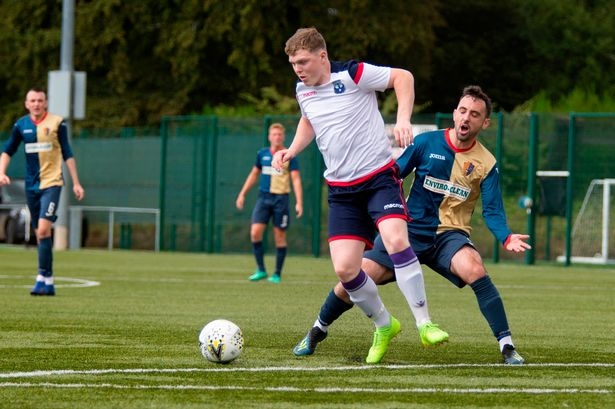 East Kilbride will be seeking to retain top spot in the Lowland League as Caledonian Braves make the short trip to K-Park this evening.

The sides approach the match after contrasting outcomes in the weekend's South Challenge Cup, as EK progressed to Round 3 after a 3-1 win at St Anthony's, whilst the Braves crashed out of the competition to the same score-line at Jeanfield Swifts.

League form since the start of the season has also seen a variance between the sides, with EK top of the table after an unbeaten start, and Braves having had an unusually slow start and languishing in 14th place.

However, it is unlikely EK boss Stephen Aitken will be fooled by the table, with Braves sure to improve due to the level of quality across a squad which features former K-Park hitmen Ross McNeil and Jack Smith. Neil McLaughlin also offer a strong goal threat for Caley and the EK back line are sure to be tested at times this evening.

Indeed it was the Braves who came out on top in the last meeting of the sides at K-Park, with McNeil, Davie Sinclair and Jean Lucas Guy on target in August 2019, whilst Craig Malcolm netted for EK. Kilby did exact some revenge in December last year with a 2-0 win at Alliance Park after an own goal and a Ruari Paton header, with Aitken and his players seeking a similar outcome tonight.

The match may come a bit too soon for EK defender Steven Old who is close to a return after an early season injury, while goalkeeper Conor Brennan could also miss out after an ankle injury sustained last week in training. However, Aitken adds Paul Woods, Chris Erskine and Paul Paton to the squad which saw off St Anthony's on Saturday after resting the influential trio in the South Challenge Cup tie.

The match is a 7.45pm kick-off, but sadly no spectators are allowed to attend due to Scottish Government COVID restrictions, but our Twitter account will provide updates, and the match highlights will feature on EKFCtv later in the week.

The club are now close to finalising our own live steam offering and hope to be in a position to issue more information about this within the next week.

Braves won 3-1 on their last visit to K-ParkVideo Link: https://www.youtu.be/tTRUDPrP7xU