Brian Kerr and his men have not played for two weeks, since the 0-0 draw at Spartans, and the Kilby gaffer is determined to return to competitive action with a win, telling eastkilbridefc.co.uk, "The short break has given us a bit of time for some injuries to heal, and we are bursting to get back in action. We have a big month ahead and it starts on Saturday with a tough test against Edusport"

Kerr may have to be without Jacob Kean, who is still recovering from an ankle knock, with new signing Goalkeeper Chris Smith expected to be involved in the squad for the first time, and the EK gaffer is optimistic all other squad members will be available for selection.

Visitors Edusport have moved up to an impressive fifth in the table after a solid start, and now have several Scottish-based players in their group to supplement their traditional French-contingent. The game should see a return to K-Park for striker Liam Coogans, who is expected to be part of the Edusport group.

Kick-off is 3pm, and admission is £6 for adults and £3 concession. One U-12 can be admitted free of charge per each paying adult.

Our new and revamped match programme will also be on sale for just £2. 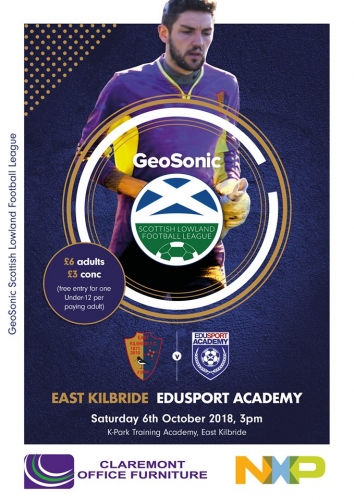