"Leight" addition as defender Tom joins on loan from Cove 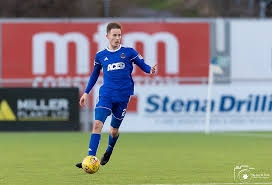 East Kilbride have completed the loan signing of Cove Rangers defender Tom Leighton, who joins up at K-Park until the end of the season.

The former Motherwell and Watford defender, who can operate at both full-back and centre-back, arrives at K-Park as Manager Stephen Aitken continues to improve his defensive options.

Leighton joined Motherwell after leaving school, and quickly earned himself a move to the EPL, joining Watford in 2017, before returning north in 2019 and making a series of appearances for Cove Rangers in SPFL League 2 before lockdown in March.

The 20-year old's loan paperwork was approved today, and Tom is available to be part of the EK squad who take on Gala Fairydean Rovers in the Lowland League at K-Park on Saturday.