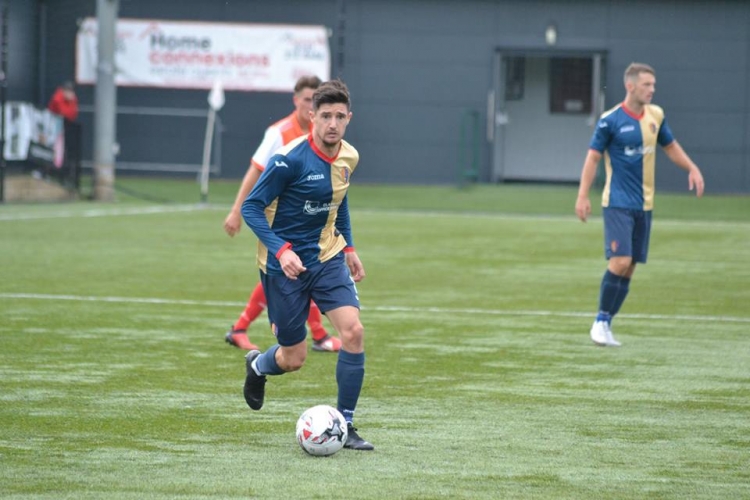 Paul Woods got the opener for EK

East Kilbride closed the gap at the top of the Lowland League, moving within one-point of leaders Kelty Hearts, after an important win over East Stirlingshire at K-Park.

Second half goals from Paul Woods and Craig Malcolm gave Stuart Malcolm's men a deserved three points in stormy conditions which made it difficult for both sides.
The first half saw little in the way of goalmouth action with the strong wing causing havoc for both sides, and half-time arrived with the game goal-less.

EK started the second half in a more determined fashion and took the lead on 58 minutes through a goal of real quality. Graeme Holmes drove forward and found the well-timed run of Woods with a fine reverse pass The lively Woodsy then did the rest, driving into the box before showing great composure to waltz past Barclay in the Shire goal and roll home to give Kilby the lead.

The match was secured nine minutes later, with another stunning goal, courtesy of captain Craig Malcolm. BJ Coll picked out a Sean Winter run with a diagonal pass, and Winter did superbly to tee-up Malky, who arrowed home a stunning finish on the slide to make it 2-0.

Malcolm had a chance to make it three moments later, but dragged a left foot shot wide.

At the other end, Shire huffed and puffed to get back into the match and came closest five minutes from time, when Andy Grant shot over from six yards when he perhaps should have hit the target.

The final moments of the game saw nasty injury to Kris Faulds of the Shire, but thankfully he was later released from hospital with only ligament damage an no sign of serious injury.

The three points sees EK now just one point behind Kelty with a game in hand, and three points ahead of third placed Spartans.

Kilby now start preparations for next Saturday's South of Scotland Challange Cup match against Preston Athletic at K-Park. Kick-off is 3pm, seasons tickets are valid for the match.