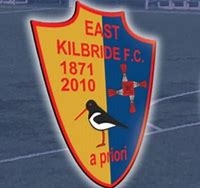 East Kilbride FC will look to finish the season on a high when they face Bonnyrigg Rose this Sunday in the South Challenge Cup.

After disappointment in the playoffs to a strong Cove Rangers side we reflect on the season and catch up with Manager Stuart Malcolm to get his views and ask him just what is needed to make the step up in to the professional ranks.

East Kilbride started the 2018/19 season with manager Brian Kerr and Stuart Malcolm taking over from Billy stark who was appointed Scotland under 19s manager.

The Ex Albion Rovers duo got the season off to a flyer and were unbeaten in their first 10 league games when a bombshell was dropped.

Brian Kerr would step down as EK Manager to take up the position as Gary Caldwell's No.2 at Partick Thistle leaving East Kilbride yet again without a manager.
Stuart Malcolm was appointed interim manager while the board decided their next move.

Malcolm first League game in charge ended in defeat away to Civil strollers.
We asked the gaffer what he remembers of that day
"I remember we started the game really well like we had done in previous games leading up to that but a couple of uncharacteristic mistakes left us chasing the game".
"it was one of those games that every team has now and then and I knew from that point we would have to move on and get back to winning ways if we were finish on top".

Saturday 3rd November East Kilbride hosted a strong East Stirlingshire side in Malcolm 2nd game in charge and the new boss looked to put the previous weeks result behind him and his side did exactly that winning 2-0.

From then on Malcolm men went from strength to strength winning 21 out of 23 games with one draw and one defeat.

East Kilbride tied up the league under the floodlights at home on the 26th March to The Spartans in a nail biting action packed game.

East Kilbride players had been fantastic and deserved to win the league with 3 games left to go; now the side had to prepare to face Cove Rangers in the Highland vs Lowland league play-offs.

April 27th was the date and K-Park the venue in the first game of the playoffs.
Asking the locals to predict the result there seemed to be only one winner and that was in the colours of gold and blue.

With a buzz in the air the game got underway and both sets of fans cheering their side on it was the away fans who were rewarded in the opening 5 mins when a header from a corner found the back of the home team's net.

The home side went into the dressing rooms at half time 0-2 down and the chance of promotion seemed to be slipping away.

Stuart Malcolm side needed to come out in the second half a different team if they were to keep the dream alive and they did that.

The players found their form and began to play like the team the home support were used to seeing and all their hard work was rewarded in the 93rd minute when Longworth scored with the last kick of the ball.

May the 4th be with you was the saying on everyone's lips when the kilby side travelled to Aberdeen to face Cove in the second leg of the play-off in an all or nothing game.

The game got underway and EK seemed to start the game as they finished the previous week playing some lovely football and passing the ball well.

The hope of turning the result around was short lived when a mistake let the home side in and they cashed in on the opportunity.

So it wasn't to be this season but we can't take anything away from our side as overall the lads have played some great football and only losing a handful of games it has been a very successful season.

But the season isn't over yet we still have a trophy up for grabs and on Sunday 26th May East Kilbride will step out onto the field in hope of finishing the season with a double.

So one month on from the disappointment of the playoffs EK media caught up with Manager Stuart Malcolm to ask him the questions everyone wants to know.

1. The question everyone wants to know
Will you be the manager for the 2019/20 season?
"Yes I will continue to manage East Kilbride FC.
I spoke with the board and it was agreed I would remain in charge for the new season and I am very happy that I am able to lead the squad again next season as we look to go one better.
The players this season have been fantastic and very professional and have done everything that has been asked of them.

2. On reflection to the play-offs could we have done anything different leading up to the game and the game itself?
"You can't change the past all you can do is learn from your mistakes and try to improve and make sure it doesn't happen again".
"It's a hard pill to swallow when your team has played so well over the course of the season that all their efforts rest on the results of 2 games".
"Again I want to thank all the players for the professionalism over the course of the season and our defensive record our aggressive attacking ability it's mad us the team to beat hopefully with the current squad and a couple of new faces we will look to better this season".

3. What will the squad look like for next season?
Over the next few weeks we will hold talks with the players and look to add a couple of new faces.

4. We face Bonnyrigg Rose on Sunday what is your thoughts on the game?
"I know Bonnyrigg are a very good side and have just been recently crowned EoS champions so they will be a difficult side to beat".

"I know they are having some difficulties just now with SFA registration being denied which is not allowing them to join our league next season as it stands.

I don't know the ins and outs of it but from a supporter of the pyramid system I find it very unfair that a side who has worked very hard to be where they are not allowed to take the step up they have all being pushing for all season.

At the end of the interview Stuart asked me to once again thank all the players for their hard work this season and for giving him the joy of managing them to a second league title. "The fans have been our 12th man this season and their support has been fantastic and I can't wait to do it all again next year and hope you are there too"