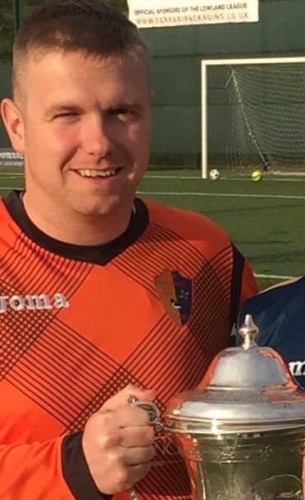 Graeme, pictured during one of many trophy successes with East Kilbride FC Amateurs

Graeme, a great servant and friend of the club, and former East Kilbride Community Trust employee at K-Park, is now offering his services and seeking to take charge of SYFA team friendlies, as he looks to build up some practical experience of his new trade, with an initial rate of £20 per match available.

Known more for his skills between the sticks, and as part of a record breaking club Kilby Amateur team which won 5 Scottish Amateur promotions and League title's in a row, Graeme now plays for EKYM in the Caledonian League, but has been working hard in the last year to gain his Referee's badge.

Should any teams wish to book Graeme for any forthcoming match and in the future, he can be contacted at: