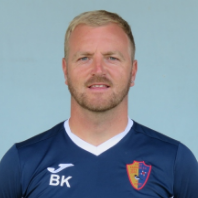 Brian is now expected to take up a full-time coaching job in the SPFL Championship with Partick Thistle, and his elevation back into SPFL football is another example of the opportunities that working for East Kilbride can generate.

Director of Football Jim Mullin, commented, "Whilst we are extremely sorry to lose Brian, we fully understand the lure of full-time coaching in the SPFL. Everyone at the club would like to thank Brian for his brilliant contribution since taking over at K-Park in June, and we wish him the very best of luck in his future pursuits."

Mullin added, "This just further demonstrates the opportunities available to players and coaches at East Kilbride. We have already seen Billy Stark and David Proctor move back into impressive coaching roles after spells at the club, and we have also had many players given great opportunities in the SPFL after starring for East Kilbride."

The club will now begin the search for Brian's successor, and current Assistant Manager Stuart Malcolm will take charge until further notice.